Metal AM: Is Welding the Way In?

Optomec’s machine tool for metal 3D printing is also an accessible system for automated welding. The embrace of one use of this machine might lead to increasing exploration of the other.

Additive manufacturing as a means of making metal parts is a new possibility for many production facilities. Meanwhile, welding is a metalworking operation that is commonplace, well-established and widely employed. 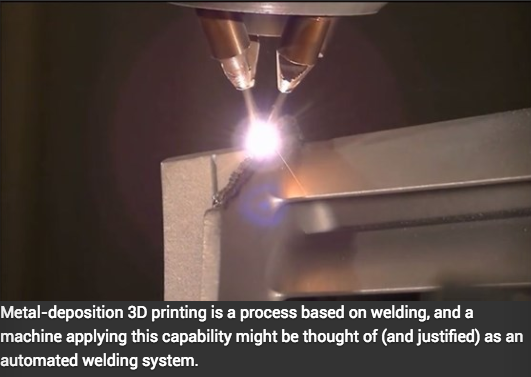 Yet aren’t these overlapping practices?

David Ramahi, president and CEO of Optomec, says his company is becoming increasingly aware of the importance of this potential use of its metal-deposition equipment. Last year, the company introduced a standard product consisting of its Laser Engineered Net Shaping (LENS) metal AM technology integrated into a standard vertical machining center. The result is a metal 3D-printing system available for about $250,000, he says, with milling capability also available in this same machine for about 10 percent more. But at that relatively low price, says Ramahi, 3D printing does not necessarily have to be the point of the machine. Where the purpose of welding is repair, or resurfacing parts to put them back into service, the machine could offer a solution for that need.

Skilled welders are becoming difficult to find, he notes. As is the case with various industrial trades, welders today are nearing retirement in greater numbers than new people are entering the field. Therefore, while replacing manual welding in some cases with automated welding on a CNC machine tool might be a leap for many facilities, it is a leap that can address an otherwise challenging personnel problem. Indeed, given that these facilities likely already have CNC machining centers, and given that widely-used software including Mastercam and Powermill has already been adapted to program the LENS machine, this choice might represent the leap into automated welding that is easiest for them to make. Along the way, it might also extend the range of repairs welding can peform, because—different from MIG or TIG welding—LENS is a targeted deposition process allowing for repair of thin walls and other delicate features with minimal heat effect.

The annual value of welding overall in industrial production is about $20 billion, Ramahi says. Welding for repair represents a share of that, but it is a share he beleives is on par with welding for joining. Thus, the annual value of repair-related welding is far greater than the current annual value of industrial 3D printing. But in the scenario he foresees, the use of one might lead to increased use of the other. Welding might be part of the way for AM to find its applications and advance into its ultimate promise. For the facility that has justified a metal AM machine simply for welding, using that same machine to 3D print features onto existing parts, or 3D print complete parts, represents a natural next step that the machine is just waiting for that user to take.